This was The first usage of the Delhi Jantar Mantar instruments, for public astronomical observations, after the observatory fell into disuse, in the 1750s

In 2004, there was considerable world wide excitement with the occurrence of the Transit of Venus on the 8th of June, that year. The last transit of Venus had been witnessed in 1882 and therefore, this was a historic event in which educators all over the world were involved in helping students appreciate historical measurements of the Earth Sun distance using occurrences of transits of Venus in the past.

This led to the origin of the idea at the Nehru Planetarium, New Delhi, that a very good way of making students appreciate historical methods of Astronomy would be to help them take observations of the maximum elongation of Venus using some of the instruments at the Jantar Mantar Observatories. There is no evidence that the Jantar Mantar observatory was used for any such measurements during the 18th or the 19th century transits of Venus, but, it should have been!

The team from the Nehru Planetarium spent several weeks during March 2004, at the Jantar Mantar Observatory of Delhi, looking into possibilities of measuring the elongation of Venus with the Jay Prakas.

Unfortunately, most of the markings on these instruments were missing and therefore the required calibration was difficult for some measurements.

What did seem possible, was to make independent measurements of the Altitude and Azimuth of Venus and the Sun, with the Ram Yantra and the Jai Prakas. These observations became possible only after we made measurements of the entire dimensions of the instruments and used a tape measure to determine shadow lengths and so on, as the markings were missing in many places. 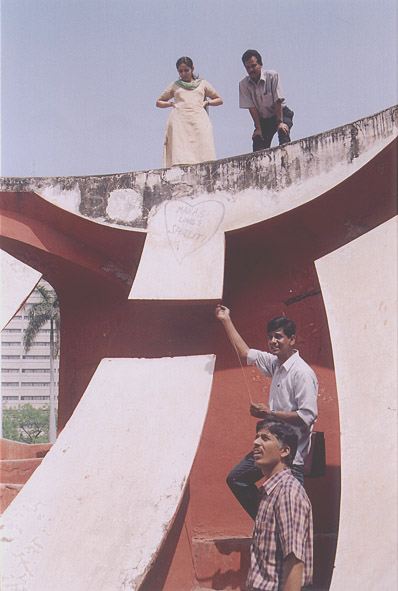 What was really thrilling, was that, once we got the hang of these measurments, it was easy to convey the method of observations to all the visitors to the observatory, on the 29th of March, 2004. 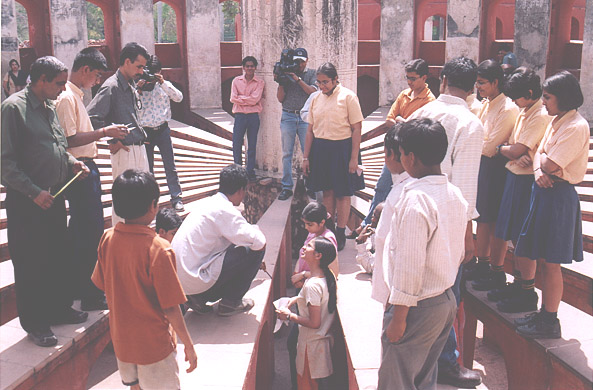 Not just that, we asked the visitors to make their own measurements and then showed them the theoretical values of Altitude and Azimuth of the Sun, that they were measuring with the Ram Yantra. They were really thrilled when they saw how close their measured values were, to the theoretical values. 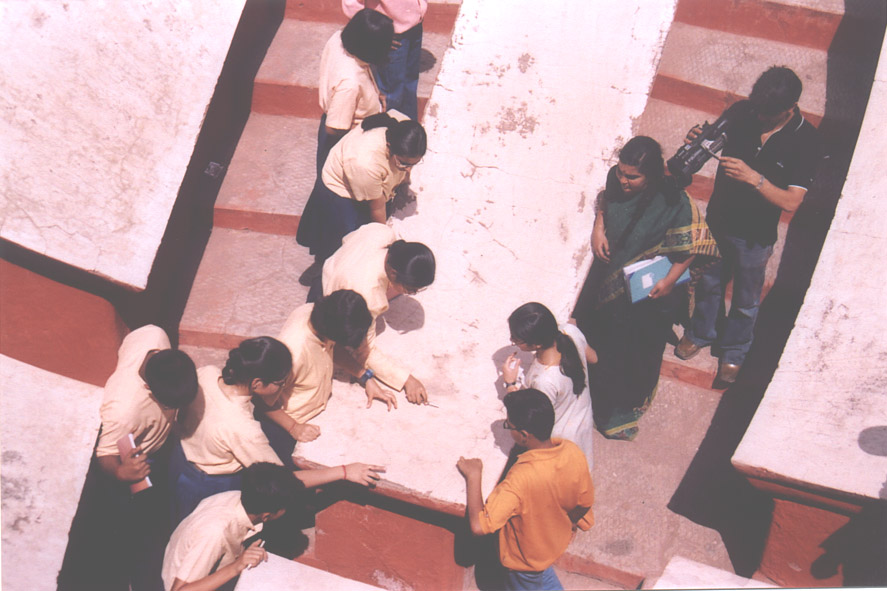 The absence of markings on the Jay Prakas was a major challenge to overcome in its usage for elongation measurement, although some limited usage of the Jay Prakas was possible for Altitude and Azimuth measurement. It was also found that observations of Altitude and Azimuth of the Sun and Venus were possible using the Rama Yantra, even if the markings were absent, as the entire dimensions of the instrument could be measured and measurements could be taken of the position of shadows (or celestial objects in the night by stationing oneself inside the instrument), using measuring tape. These values could then be converted into information regarding the elongation of Venus.

Public observations for the measurement of maximum elongation of Venus were then organised on the 29th of March 2004, by the Nehru Planetarium, after obtaining permission from the Archeological Survey of India. Throughout the day, volunteers from the Planetarium were present at the Rama Yantra and the Jai Prakas, explaining the intricacies of their usage to the visitors. Interested visitors were then trained to take actual observations of the Altitude and Azimuth of the Sun using the Rama Yantra and the Jai Prakas. The values obtained by the visitors were compared with theoretical values, then and there, as the Planetarium team carried printouts of theoretical values of the Altitude and Azimuth of the Sun, for every minute on that day. Visitors were amazed and delighted when they found that their simple length measurements were yielding celestial data accurate within a degree or even less, in some cases. Refraction corrections were not applied for these readings.

This accuracy, was perhaps not the kind of precision required for serious astronomical observations. But, it was a beginning towards a public appreciation of the actual usage of the instruments. A report of all the observations done on that day (10 observations of the Altitude and Azimuth of the Sun using the Ram Yantra, 5 observations of night time Altitude and Azimuth measurements of stars and planets and 3 observations of the Altitude Azimuth of the Sun using the Jay Prakas) appeared in the November 2004 issue of Resonance, June 2004 issue of Nojum, an Iranian Journal of Astronomy and on a French website (Venus2004.org a project of Futura-Sciences) on Transit of Venus Activities.

The results of public observations conducted on the 29th of March 2004, appeared here

They are also discussed here

Retrieved from http://www.nehruplanetarium.org/taarewiki/pmwiki.php?n=Site.VenusElongationMeasurements
Page last modified on August 04, 2008, at 04:58 AM EST