A tutorial for a light pollution watch

... "You look at a star for two reasons, because it is luminous, and because it is impenetrable" ... Les Mirables, Victor Hugo, written in 1862

... "The sky was clear -- remarkably clear -- and the twinkling of all the stars seemed to be but throbs of one body, timed by a common pulse. The North Star was directly in the wind's eye, and since evening the Bear had swung round it outwardly to the east, till he was now at a right angle with the meridian. A difference of colour in the stars -- oftener read of than seen in England -- was really perceptible here. The sovereign brilliancy of Sirius pierced the eye with a steely glitter, the star called Capella was yellow, Aldebaran and Betelgueux shone with a fiery red." ... Far from the Madding crowd, Thomas Hardy, written in 1874

... " He leant back against the hives, and with upturned face made observations on the stars, whose cold pulses were beating amid the black hollows above, in serene dissociation from ... wisps of human life." Tess of the d'Urbervilles, Thomas Hardy, written in 1891

How many creative spirits were inspired by views of myriads of stars against dark and serene skies! In our times we may never ever experience such inspiring skies if we stay cocooned in cities and towns and the highways connecting them.

Light pollution seems to have become all pervasively hurtful to our eyes, unless we are fortunate enough to reach a few dark corners of the Nation left untouched as yet, by Development indices. How rare it might be for some of us, to make such trips :(

Light pollution exists in our face, there is no gainsaying it. What is more, it might be worsening in front of our eyes, even as we blink them to shade from the glare.

We may wish to have a quantitative estimate of how bad the situation is, where we are, just so that we could have a Light Pollution Watch Alert.

Would you like to do that? Make an estimate of light pollution from the location from which you are trying to observe the stars? You need only a little familiarity with the stars yet remaining visible, from your location.

Here is how you could get a quantitative feel of the amount of light pollution, from your location.

Shown here is a skymap (imagine the whole sky overhead, mapped onto this circle) for 7:30 PM 17th of January 2015, location of Delhi, showing all the stars (and the comet Lovejoy, which can be seen just to the left of the central green cross hair) which could have been seen by the naked eyes, if Delhi had no light pollution - none at all. 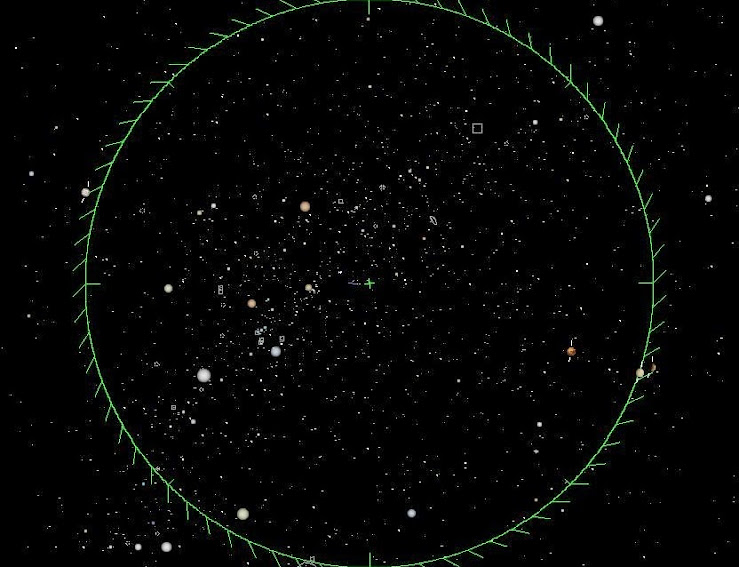 Hipparcus, in ancient Greece, was the first Astronomer to notice and quantify the visible differences in brightness of stars. He categorised all the visible stars into 6 groups of magnitudes. The brightest stars he placed in Magnitude 1 group and the faintest visible (to naked eyes) he placed in Magnitude 6 group. Modern day Astronomy techniques of measuring the brightness of stars continues with this basic scheme but, ofcourse, with sophisticated observing and measuring techniques, this classification into magnitudes extends to much finer gradations. We have stars, in the modern magnitude scales of measurements which are brighter than magnitude 1 (they may even go into negative magnitudes), fractional values of magnitudes assigned to stars allows for finer measurements and categorizations and finally, with the telescope opening our knowledge of fainter and fainter stars, the magnitudes of stars observed has increased from 6 to values above 20 for very faint objects seen with the largest of the telescopes in the world.

Many of us start our sky observations without any equipment at all apart from our eyes, and we may think that stars from negative magnitudes to those of magnitude 6 should surely be visible to us, as in the figure above (including the now naked eye visible comet Lovejoy) without access to a telescope, surely, as these are supposed to be naked eye visible?

So much for fruitless dreams. Delhi does have Light Pollution. Oodles and oodles of it. So much, in fact, that at times it might be lamenting (paraphrasing Shakespeare) - "That I should see just a bright particular star" 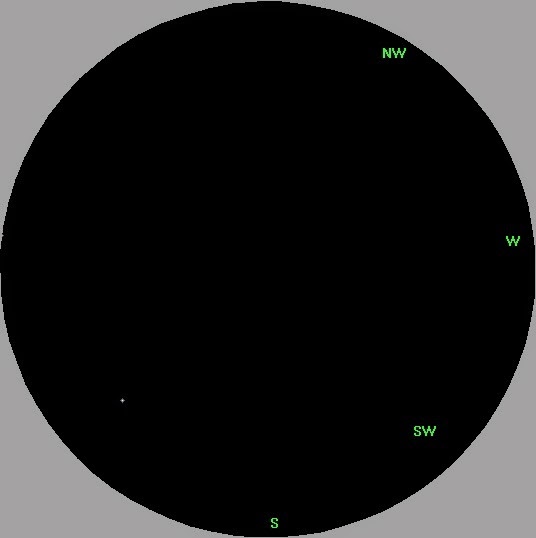 This is how Delhi skies might look sometimes - with just that one star valiantly remaining visible through the haze and mists of January. This is Sirius, the Dog star, in the constellation Canis Major, the rest of the constellation is not visible above. Sirius has a magnitude of -1.46 and is thus on the map above which has removed all stars fainter than magnitude zero. 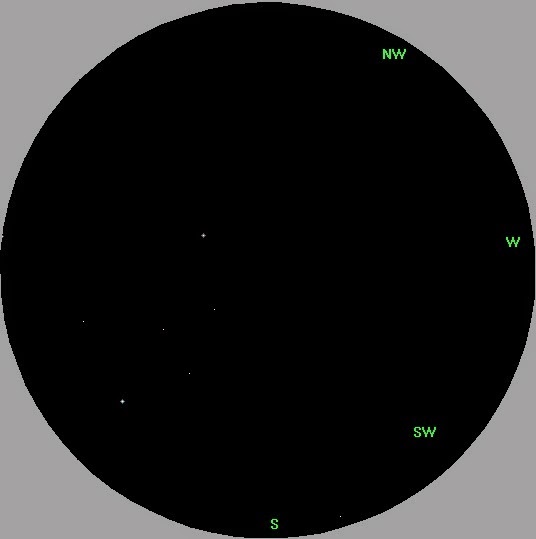 The above is a map where all stars fainter than Magnitude 1 have been removed. Visible here, are the stars Procyon, Sirius, Rigel, Betelguese, Aldebaran and Capella. 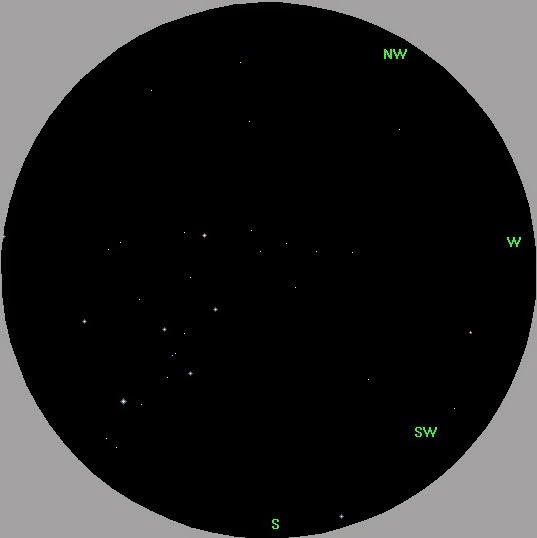 The above is a map where all stars fainter than Magnitude 2 have been removed.

The above is a map where all stars fainter than Magnitude 3 have been removed. The above is a map where all stars fainter than Magnitude 4 have been removed. 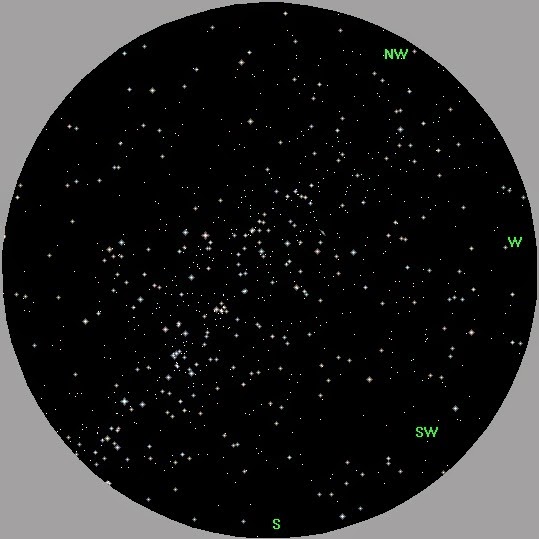 The above is a map where all stars fainter than Magnitude 5 have been removed. 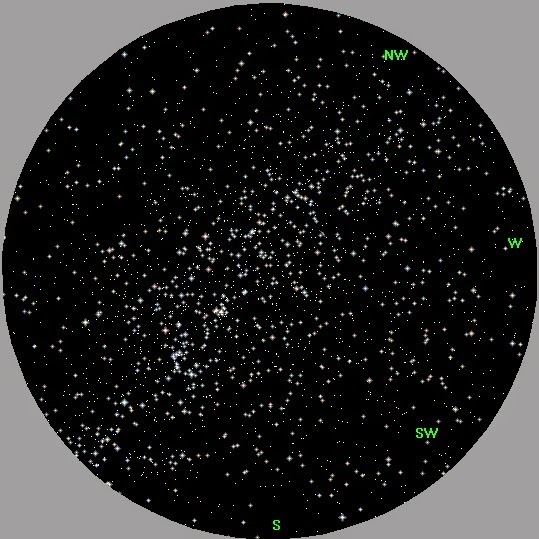 The above is a map where all stars fainter than Magnitude 6 have been removed. These are the skies which nature intended our eyes to see, until we callously filled our skies with the monster of light pollution.

Retrieved from http://www.nehruplanetarium.org/taarewiki/pmwiki.php?n=Site.Starcounts
Page last modified on January 16, 2015, at 08:25 AM EST