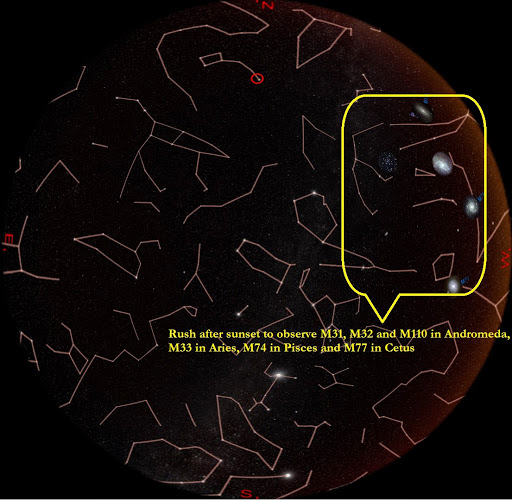 The sky immediately after sunset on the evening of March 21st, North Indian latitudes

One can see that these objects are very close to the Horizon, just after sunset, and quite challenging to observe before they set. Moreover, from city locations they will anyway be a washout due to the extensive horizon haze and light pollution.

However, those attempting to view these from darker locations may find these finder maps of some use.

One of the objects of enduring interest in these Messier observations is the Andromeda Galaxy M31. February would have given easy glimpses of it and it becomes tougher in March, being so close to the horizon.

One can see the relative locations of the stars of the Pegasus and Andromeda Galaxies with respect to the just set Sun, for the evening of the 21st of March, in the image below. The elongated grey ellipse is centered on the Andromeda Galaxy. And, here is a closer look at this region, with the relevant stars of the Andromeda constellation still in view and stars down to magnitude 9 visible to help with star hopping to this region using a manual telescope. 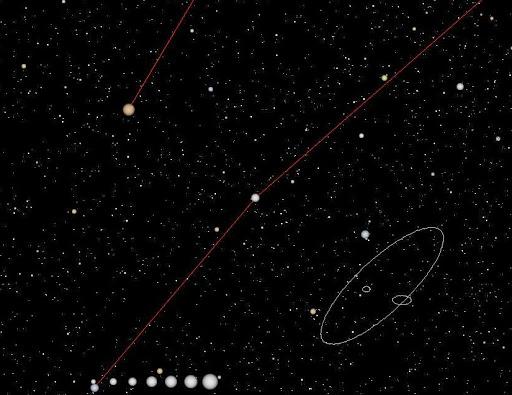 The smallest circle in the grey ellipse is marking the Messier object M32, while the midsized ellipse marks the location of M110 or NGC 205.

Wile M31, the Andromeda Galaxy has the naked eye visible magnitude of 4.4, the other two are much much fainter, M32 at a magnitude of 9 and M110 at 8.9 and they are going to need some aperture for sure, particularly from not so good skies.

Back to Messier Marathon Main