Site: An alternative Marathon with Messier

We have the classical Amateur Astronomers - those for whom "The Sky" is everything and they know every crack in the starry sidewalks of this Broadway. These are the amateur Astronomers who would be up all night observing meteor showers well before and after the predicted peak times and would be able to locate every Messier object and many other deep sky objects besides, using a manual telescope. Our salutations to these amateur Astronomers.

Through outreach efforts we also interact with many beginners to the joys of skygazing as also those who may have some experience of observing the skies and its wonders through telescopes, but, who may not yet have joined the classical group mentioned above.

Well, addressing the latter group, here is an alternative approach to the Messier object observations - let us attempt to get as many new comers interested in observing these objects as possible - a Marathon where we want to add to our group a number of people who may never have observed deep sky objects through telescopes before and who might through our efforts end up observing at least one and if possible, many Messier objects in the near future.

So, to begin with, what is this Messier Marathon which intimidates the non classical amateur Astronomers and the beginners?

Charles Messier was a French Astronomer, who was hunting for comets in general and for the 18th century return of the Comet Halley in particular.

While hunting for comets, he found here and there in the telescopic skies, fuzzy deep sky celestial objects, which were not the comets that he was looking for. He called them comet masqueraders - objects he was impatient with. Impatient enough to systematically catalogue them to warn other comet hunters along with himself, not to waste time on these celestial objects.

And what objects these are! The very first of these Messier objects M1 is the fascinating supernova remnant the Crab Nebula. The 51st object in this catalogue, M51 is the intriguing spiral Galaxy known as the Whirlpool Galaxy. The indescribable beauty of the naked eye visible open cluster, The Pleiades or Krittika has been described by Tennyson as a swarm of fire-flies tangled in a silver braid. It is surprising that Messier found it necessary to add this also to his discarding bin of celestial objects - the Pleiades is M45.

And so many more, globular clusters, nebulae and galaxies, all found their way into his catalog.

So, where does a Marathon enter the picture?

Well, this particular pastime has a much later origin, just in the last few decades of the last century.

In the 1980s, recognising the fact that during a particular time of the year, the Sun parks itself in a part of the sky relatively devoid of these Messier objects, allowing a glimpse of all of the 100 Messier objects in one night of observation if one knew one's way around the telescopic skies well enough, amateur Astronomers started the tradition of a single overnight observing session to locate all the 110 Messier objects - the Messier Marathon. The race need not be seen as against another amateur Astronomer but it seems like a race against time - in order to be successful in observing all the objects. 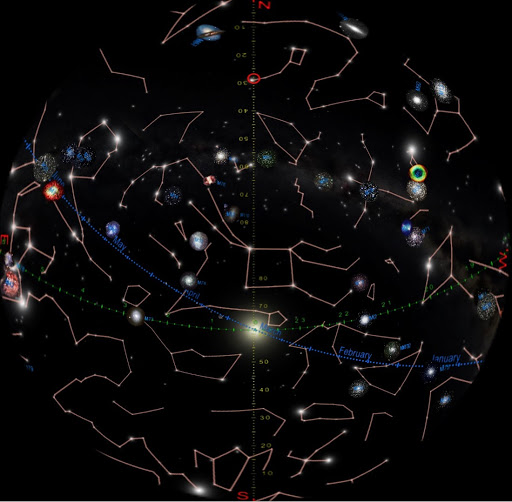 Location of the Sun on the 21st of March with respect to the background stars, constellations and the artificially zoomed in Messier objects visible in this part of the sky. The skymap is set for Delhi.

In contrast, if we look at the position of the Sun in the sky in the month of December, let us say, so many Messier objects are plumb there in the sky where the Sun is, at this time. 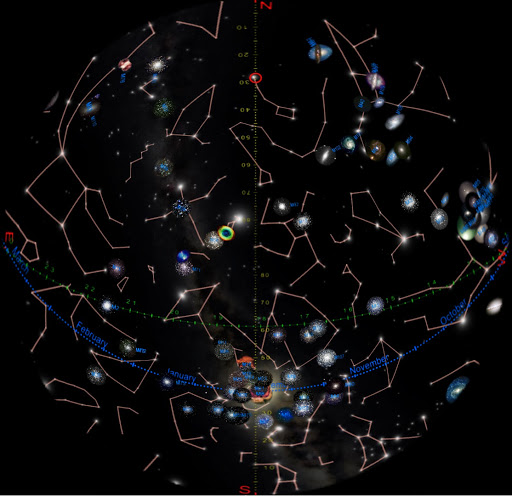 The position of the Sun in December with respect to the background stars, constellations and the artifcially zoomed in Messier objects visible in this part of the sky. The skymap is set for Delhi.

Thus, at North Indian latitudes the date of 21st of March works well to set out to observe these Messier objects all in one night.

Wait, for observers in contemporary times and from most cities and towns in India, there is yet another factor against which your Marathon race needs be run and perhaps it might not really succeed against this rival to the celestial objects.

This is the monster of Light Pollution, all pervasive in the skies of Indian cities and towns.

While the Sun at this time of year is in a part of the sky devoid of Messier objects, there are some of these objects which, at this time of the year, are placed not so very far from the Sun. These then would be visible low in the horizon just before sunrise (the eastern horizon) or just after sunset (the western horizon). These are the Messier objects which you might need to strike off your list of possible observations if you are conducting observations from a city/town.

For the rest, those who plan to go for observations to a dark site away from light pollution, the entire set of those 110 glittering Messier objects beckon :)

So, we then have the following divisions of labour, in our modified Messier Marathon. Our object is to attempt veiwing as many of these objects as possible, during a skywatch in the month of March, but, ensure also that we make as many people as possible, join in. Particularly those who may never have looked at any celestial object through a telescope before and facilitate for them an appreciation of what exactly is the thrill of obtaining eyepiece views of these fuzzy comet masqueraders.

Back to Doorstep Astronomy March 2015