What is there in the theater of the sky (the real sky, not the planetarium sky theater) for us this month of February?

Last month, there was all that buzz about the Comet Lovejoy C/2014 Q2, the buzz was very muted from the city of Delhi, due to its enveloping haze of light pollution.

The comet continues its presence in February skies although it is now going dimmer each following evening. 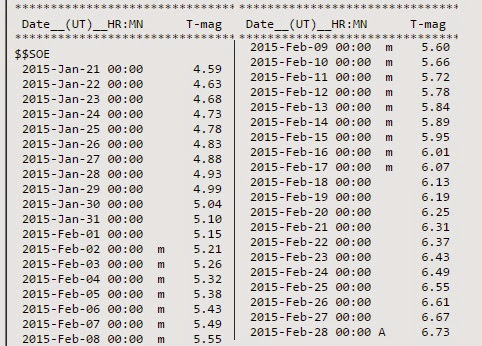 The comet brightness in the coming days given in terms of its magnitude.

We see that the comet dims from a magnitude of about 5 at the beginning of the month to about 6.7 towards the end of the month, fainter than naked eye visibility.

Stars upto magnitude 6 are supposed to be naked eye visible and we were to make a map of the different objects which could be visible in the sky, say, at 8 PM on the third saturday of the month, for North Indian latitudes, we may expect it to be something like this:

Retrieved from http://www.nehruplanetarium.org/taarewiki/pmwiki.php?n=Site.February2015
Page last modified on January 21, 2015, at 10:07 AM EST