The Jantar Mantar Observatory, Delhi, consists of four main instrument complexes: starting from the northern end of the observatory and going southwards we encounter the Misra Yantra, Samrat Yantra, Jai Prakas and the Ram Yantra.

The Misra Yantra of the Delhi Observatory is a unique teaching instrument for positional Astronomy, thought to have been built, not by Sawai Jai Singh, but, by his son Madho Singh, who also had some astronomy interest. 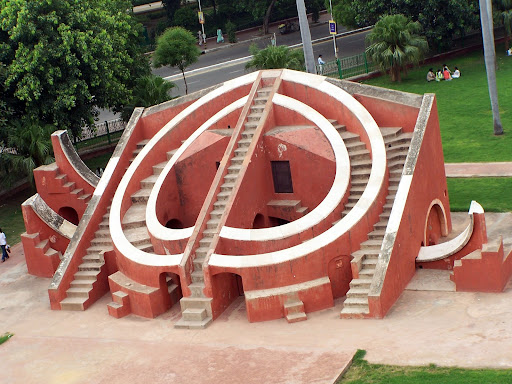 The most recognised aspect of this instrument is the arched marble Niyat Chakra which defines its front elevation. These measure the Declination (angular distance from the celestial equator) of the Sun and other celestial objects in a beautifully simple manner.

This is an equinoctial sundial. The term equinoctial refers to the fact that the quadrant arcs of the sundial are in the plane of the equator. The triangular central wall of the instrument is oriented such that it points towards the North celestial pole. The angle in the right angled triangle is equal to the latitude of this location. With such a configuration, on the quadrant arc, the shadow of the triangular wall moves equal distances in equal intervals of time. It is this movement that is used to tell time.

The Samrat Yantra at the Delhi Jantar Mantar Observatory, has a strange history. At some time in the past, some of the excavated pit around the central gnomon of the instrument was filled up, as the area had become a swamp. This resulted in the loss of a segment of the quadrant of the instrument on either side of the central gnomon. On account of these missing segments of the quadrants, all the existing literature treats the Samrat Yantra as an instrument that is no longer usable.

Near the central gnomon of the Samrat Yantra, a horizontal cemented platform is present that seems to be a continuation of the quadrant. Using this platform, as a replacement for the quadrant, the instrument can still be used in its entirety. The instrument will have to be used as an equinoctial sundial, using the original calibration of Jai Singh's Astronomers on the intact segments of the Samrat Yantra and a calibration analogous to a European sundial on the horizontal platform where the quadrants are missing.

Jai Prakas are twin hemispherical bowl instruments, each a reflection of the sky above, and marked in sectors and gap regions.

The bowls are complementary, in the sense that, the gap region in one bowl is the sector region in the other and vice versa. The idea being that, the observer needs to be inside the bowl, to take readings - which means that readings would not be possible in the regions where the observer would be able to walk - and hence the complimentary bowl. 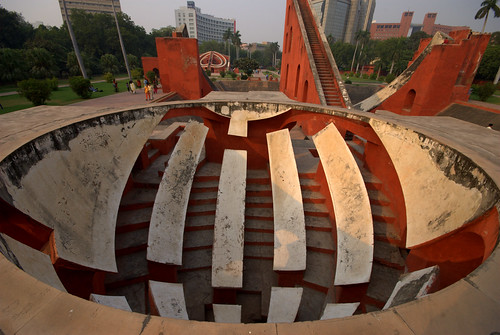 The sectors on the surface of the hemisphere should have markings on them that would facilitate measurement of the local as well as the equatorial co-ordinates of a celestial object. There should also be markings for the measurement of time and the approach of a sign of the Zodiac, on the Meridian.

The Jai Prakas, is a complete instrument, with an ability to make many of the measurments done individually by the other observatory instruments.

The Ram Yantra can measure the local co-ordinates of Altitude and Azimuth, of a celestial object.

The angular height of an object, from the Horizon, is the Altitude. The Azimuth is the relative anglular position of the object measured eastwards, starting from the direction, North.

Each of the cylindrical Ram Yantra consists of a circular wall, floor sectors and a gnomon at the center. The gaps inside the instrument are for facilitating the movement of observers to read the markings and hence, the complimentary instrument is designed in such a way that, the shadow falls on a sector of one of the instruments, if it falls in the gap for the other instrument. Spliced together, the two instruments make a whole cylinder whose inner walls and the floor is a complete reflection of the sky above.

The height of the walls and the gnomon has been designed to be exactly equal to the inside radius of the cylinder measured from the outer circumference of the gnomon.

Azimuth angles are marked on the floor and walls of the Ram Yantra as sectors. Azimuth is zero towards the North and increases eastwards.

Retrieved from http://www.nehruplanetarium.org/taarewiki/pmwiki.php?n=Site.Delhi
Page last modified on February 07, 2015, at 12:09 AM EST